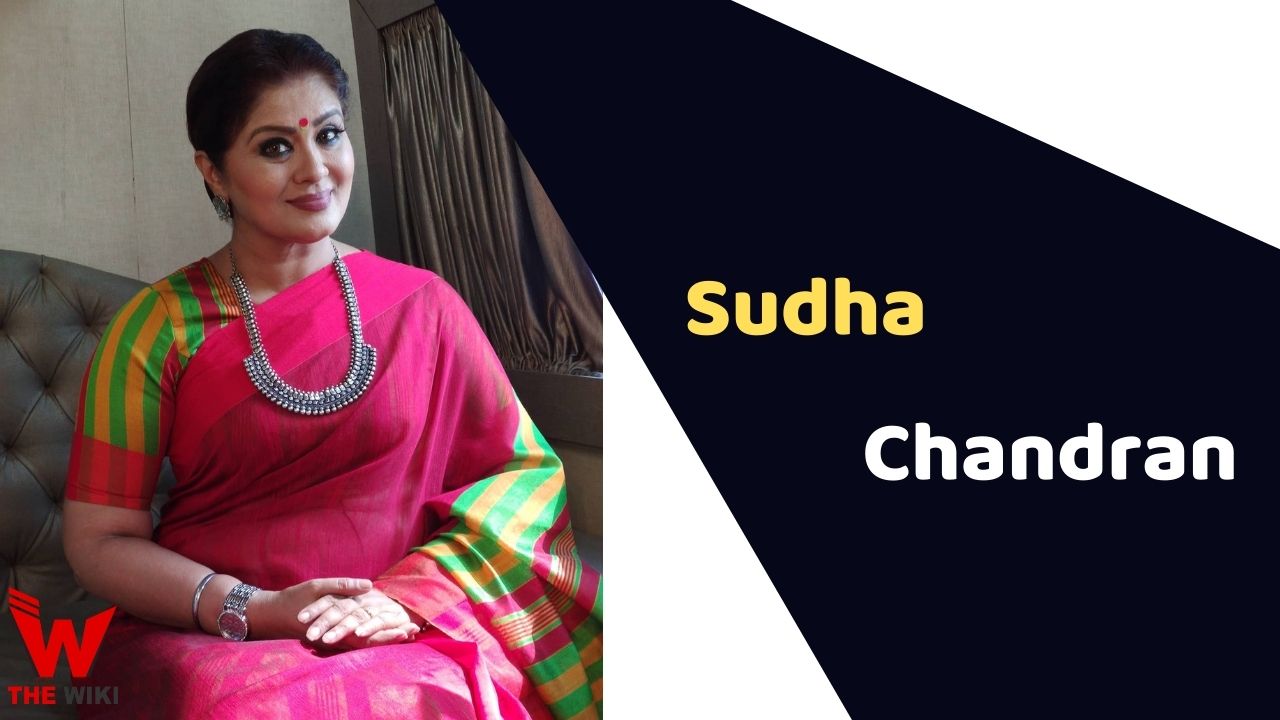 Sudha Chandran is an Indian soap opera actress who predominantly serves in the Bollywood, Malayam, and Tamil film industries. She is a professional Bharatanatyam dancerwho turned to acting following the loss of a leg in an accident in May 1981 near Trichy, Tamil Nadu. Sudha is famously known for her roles in Vasantha Raagam (1986), Phoolan Hasina Ramkali (1993), Hum Aapke Dil Mein Rehte Hain (1999), and Malamaal Weekly (2006).

Sudha Chandran was born on 27 September 1965 in Kannur, Kerala. Her father’s name is K.D. Chandran and her mother’s name is Thangam. Sudha tied the knot with Ravi Dang in 1994. She completed her graduation from Mithibai College, Mumbai.

Sudha rosed her career with the Telugu biographical-dance film Mayuri as Mayuri Olpam in 1984. The film draws inspiration from the her own life. The film was also dubbed in Tamil and Malayalam; and remake in Hindi. Later she debuted with the Malayalam film Malarum Kiliyum as Rekha in 1986. The same year, she made her debut with the Hindi movie Naache Mayuri as Mayuri in 1986. She acted in the Tamil romantic-drama film Vasantha Raagam as Vasantha in 1986. In 1993, she got cast in the blaxploitation movie Phoolan Hasina Ramkali as Phoolan. She performed as Thakurain in the 2006 comedy movie Malamaal Weekly. In 2011, she appeared as a Judge in the thriller movie Yeh Faasley.

In 2013, Sudha got featured in action film Ameerin Aadhi Bhagavan as Indra Sundaramurthy. The film follows a Thai gangster who lives apart from his mother and sister for his criminalities. In 2017, she starred in the supernatural romantic-drama film Tera Intezaar as Black Magician Madam. In the same year, she portrayed the role of Vijayalakshmi in the action-thriller movie Vizhithiru in 2017. She acted in the film Sifar as Ayesha in 2019. She did a movie Raag in 2021.

Sudha debuted with the television series Rishtey as Sonu on Zee TV in 1993. From 2000 to 2001, she got featured in the tv series Shaka Laka Boom Boom as Sanju’s mother. She appeared in the serial Kaahin Kissii Roz as Ramola Sikand from 2001 to 2004. From 2002 to 2005, she starred in the serial Kyunki Saas Bhi Kabhi Bahu Thi as Renuka Chaudhary aired on Star Plus. She starred in the Zee TV show Tum Bin Jaaoon Kahaan as Guruma from 2003 to 2004. In 2007, she took part in the dance reality show Jhalak Dikhhla Jaa 2 aired on Colors TV.

From 2008 to 2011, she played the role of Shwetha Devi, a fake Mata rani in the serial Mata Ki Chowki – Kalyug Mein Bhakti Ki Shakti. She acted in the Tamil series Thendral as Bhuvana, Thulasi, and Prabhakar’s mother from 2012 to 2015. In 2013, she played the role of Mrs. Vyas in the serial Dil se Di Dua Saubhagyavati Bhava?. From 2014 to 2015, she starred in the Colors TV’s supernatural-fiction series Naagin as Yamini Singh Raheja. She guest-starred in the reality show Bigg Boss season 14 in 2020. She did a Zee TV’s series Naagin Season 6 as Seema Gujral in 2022.

Some Facts About Sudha Chandran

If you have more details about Sudha Chandran. Please comment below we will updated within a hour.